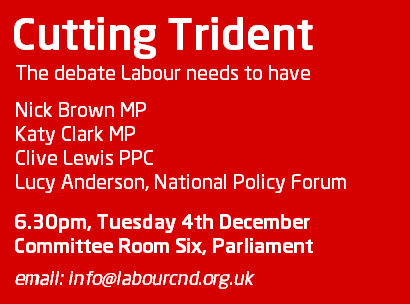 The debate Labour needs to have

The National Policy Forum document presented to the Conference stated that due to ‘different perspectives’ on Trident replacement there will be ‘further discussions’ next year.

These discussions should be held as widely as possible throughout all levels of the party, and must ensure those who believe we should cut Trident – and scrap nuclear weapons entirely – are listened to.

Trident does not address our real threats. Its replacement is unaffordable. A Labour Government should introduce an industrial plan to maintain employment and the use of the skills base in the related industrial sites – and commit to scrapping Trident.

We are delighted that Nick Brown and Clive Lewis are joining us for this meeting, and further speakers are set to be announced.

Join us as we begin the debate on 4th December.
For more on the debate at the pre-conference National Policy Forum, and the document itself, see Jon Lansman’s blog.