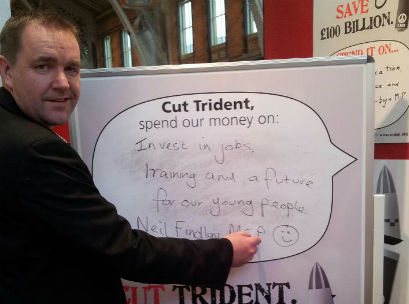 Nuclear conflict is a scenario too horrific to contemplate. The existence of weapons of mass destruction like Trident is bad enough but plans to replace our current stockpile with newer, more powerful and eye-wateringly expensive warheads at time of financial crisis is morally as well as practically questionable.

Not only would the replacement of Trident contribute to a new arms race it would also, quite simply, cost too much money at a time when the country can ill afford spending such gross sums; money which could and should be better spent on job creation, public services, health and social care.

Shortly before his tragic death in 2005, Robin Cook said, “nuclear weapons now have no relevance to Britain’s defence’s in the modern world.” When we consider producing the new nuclear submarines will cost an apparent £25billion alone, and that the whole project could exceed £100 billion over its lifetime, Cook’s words seem more relevant than ever.

Supporting Trident’s replacement just as the British people are facing an onslaught on public services, the welfare state, jobs and living standards will understandably be a hard sell. Rightly, people will ask how we can afford Trident when we face the loss of 710,000 public sector jobs by 2017.

Currently, the Tory-led government has confirmed that despite the crisis in the country’s finances, it will be ploughing ahead with Trident replacement. But if the Tories are making a mistake, it is clear that Labour needs to re-evaluate our position and fully debate Trident.

Unfortunately, Labour pursuing Trident in Westminster has, up until now, given the SNP an easy ride.

Scottish Labour has watched as many natural allies have sat down with the SNP to discuss working together on an issue that should be own. Currently the SNP are moving towards abandonment of their long standing policy of opposition to membership of NATO – this will inevitably be followed by at best a fudge or more likely an end, to their opposition to Trident.

This presents an opportunity for Labour.

An increasing number of polls show the public sees no future in nuclear weapons, and an even greater majority of Scots oppose Trident based at Faslane. Labour should move with popular public opinion. The trade unions, the churches, and civic society stand against nuclear weapons.

This is the agenda Labour should also champion.

Neil Findlay is Member of the Scottish Parliament for Lothians region.