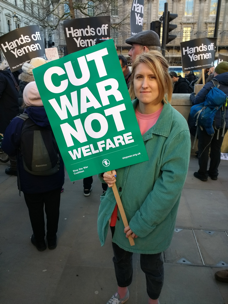 The arms that Britain sells to Saudi Arabia have been used in its war on Yemen, a war that’s sparked what the UN describes as the worst humanitarian crisis in the world. As Defence Minister, the Crown Prince has led that war. When the Prime Minister Theresa May invited him over, an ad hoc committee got together to organise a series of activities in opposition to the visit.

These included a parliamentary petition calling for the invitation to be withdrawn which attracted 11,863 signatures. Under parliamentary rules the government is required to respond if a petition is supported by 10,000 people. In response, the Foreign Office issued a statement claiming, among other things:

The ad hoc committee issued a repudiation. You can read both on the Stop the War website.

The success of the committee shows what can be achieved when peace organisations come together with progressive Arab organisations.

The committee included Campaign Against the Arms Trade, Global Justice, Peace Pledge Union, Stop the War and War on Want, as well Arab Organisation for Human Rights UK, the Bahrain Opposition Bloc, BIRD, Human Rights for Yemen, Iraqi Democrats, Sheba for Democracy and Human Rights, Stop the War. Its success in part lies in the collaboration between UK peace organisations and progressive groups from the region. Watch this space for news of further action.