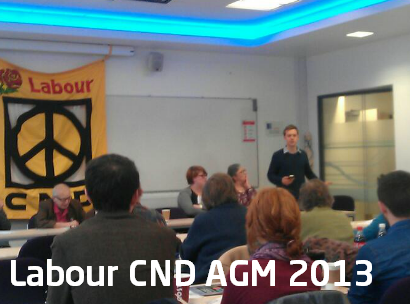 At our 2013 AGM, Marian Hobbs, former Disarmament Minister in the New Zealand Labour government opened the conference and welcomed a room full of young activists.

She said there was no better time than now for Labour to prepare for carrying out nuclear disarmament after 2015, with the perfect storm of the end of Trident’s operational life meeting the changed security requirements of the post-Cold War world and the pain of austerity calling expenditure on major military projects in to greater question.

In the morning panel Owen Jones took up the question of cost and said a Labour government elected in 2015 spending billions on Trident while families suffered under austerity would be ‘a sickening spectacle’.

He talked about the catastrophic effects of nuclear weapons, referring to the 80s film Threads set in his hometown. The humanitarian impact of nuclear weapons was the subject of an interantional conference the week before the AGM, but which the UK had boycotted.

Kate Taylor repeated the message, saying, ‘To me, the NHS is essential. The welfare state is essential. Support for the disabled, free higher education, affordable housing, having enough money to heat your home and eat – those things are essential. Weapons of mass destruction – Trident – is not.’

As a councillor for a naval port, she took a combative stance against Trident, saying an ‘MOD report found that if they were to relocate Britain’s weapons of mass destruction to Devonport, and there was a nuclear accident, their worst case scenario was that 11,000 people would be killed by radiation poisoning … if these weapons are too dangerous for Plymouth, then they’re too dangerous for Faslane and Milford Haven or for any other community the MOD would want to inflict them on.’

Clive Lewis, the PPC for Norwich South, was asked to look at the 2015 election and gave a wide-ranging speech that condemned New Labour’s ‘Faustian pact with neo-liberalism’ and unfettered dominance of the market and big business’.

On Trident, he said, ‘we know the moral, economic, military and strategic case for non-renewal is overwhelming’ and on international non-proliferation, said ‘we have no right to intimidate other countries into not possessing nuclear weapons when we have them on such a large scale ourselves. It’s this hypocrisy, that undermines the entire nuclear Non-Proliferation Treaty.’

Annabelle Harle, on the party’s policy making process, and the new Your Britain site in particular, said, ‘The argument can be won across the spectrum … so get on there and write – remember that the views of members, CLPs and party groups count for more, and community groups are popular too – so go back to your constituencies tonight and log on’.

The day finished with an AGM committing Labour CND to working in the party to build opposition to Trident replacement and secure a manifesto commitment to scrapping it as well as urging the Labour leadership to make greater commitments to initiatives to advance negotiations for multilateral disarmament. 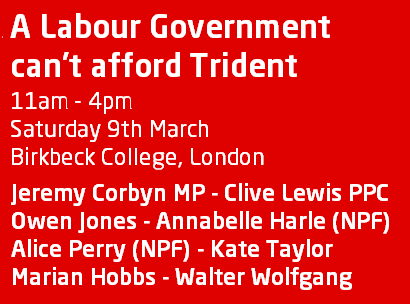 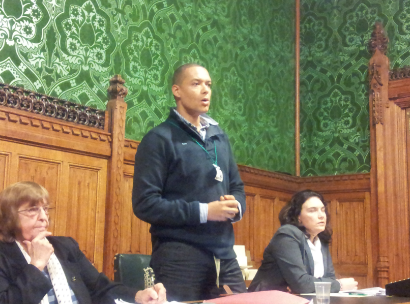 A short while ago, the 50th anniversary of an event so profound it almost wiped humanity from the face of the planet passed us by – with little media interest. 22 October, 1962 – the Cuban Missile Crisis.

Sat on a ringside seat for humanity’s brush with oblivion was Robert McNamara – US secretary of state for war. McNamara oversaw much of the Vietnam war and the build-up of US nuclear capability at the height of the cold war. And yet in 2004, he declared: “The indefinite combination of human fallibility with nuclear weapons leads to human destruction. The only way to eliminate the risk is to eliminate nuclear weapons.”

He developed what became known as “McNamara’s Dictum”: 1. nuclear weapons make nuclear war possible; 2. human fallibility means that a nuclear exchange is ultimately inevitable; 3. a major nuclear war has the capacity to destroy civilisation and threaten the survival of the human race.

In all likelihood the UK’s current independent nuclear deterrent could, on its own, achieve point 3. Each Trident warhead, of which there are 40 per submarine, is estimated to be able to kill over 1 million people outright. The vast majority of those killed would be civilians. Countless more would subsequently die from secondary radiation exposure. All of this possible at the mere push of a button or, as McNamara feared, as the result of simple human error or a technical glitch.

If a rational debate on Trident were ever held in the Labour Party, the inevitability of McNamara’s dictum alone should be enough to end our party’s dalliance with nuclear weapons. Common sense and a Darwinian instinct for survival should ensure that.

But it’s a mistaken clamour for political survival not humanity’s survival that motivates the proponents of nuclear weapons within the Labour Party. Elements cling to nuclear weapons like a religious mantra. To even question the need for one is akin to blasphemy of the highest order and would supposedly presage the re-authoring of another lengthy political suicide note. But scaremonger as they will, the cold weight of logic, military reality, economic necessity, political pragmatism and moral rectitude means the terms of debate have shifted out of their favour.

In a recent exchange in the House of Commons, one of Labour’s shadow defence team trotted out the same old tired mantra: “In a security landscape of few guarantees, our independent nuclear deterrent provides us with the ultimate insurance policy, strengthens our national security and increases our ability to achieve long-term security aims.”

On the surface it sounds like an authoritative and credible position. But dig a little deeper and its vacuous nature becomes apparent – namely that an almost unimaginable destructive capability can actually defend us.

To describe “Mutually Assured Destruction” as an “insurance policy” would be comical if it wasn’t such an appalling concept. Nuclear weapons “strengthen our national security”? In the past 30 years, often with national interest or security being cited, the UK has been involved in a number of overseas conflicts but the use of Trident has never seriously been considered.

The one consistent factor throughout all these conflicts was under-equipped conventional forces. In today’s current financial climate, with demands being made on the MoD to cut spending, forking out anywhere between £30-100bn for Trident replacement is unthinkable in terms of the cuts our frontline forces will have to endure. 21st century Britain will become an increasingly toothless tiger that can do little more than posture with its finger over a button it will never use. Our forces deserve better. The country deserves better.

Do nuclear weapons “increase our ability to achieve long-term global security aims”? Since the 1980s, non-nuclear armed Germany and Japan, not nuclear armed Britain and France, have had more clout with Washington. Political status does not necessarily depend on nuclear capability. Increasingly, nuclear weapons are a fig leaf for our political poverty on the international stage. What both Germany and Japan did possess was economic clout.

No doubt relinquishing our nuclear arsenal would irritate Washington but what would the US rather have, the UK able to assist in military operations or an ill-equipped conventional force and a nuclear arsenal which will never come into play?

Ultimately, any decision the Labour Party makes must not only factor in political considerations but military ones too. Understandably, the electorate places great faith in the professional soldiers and strategists that run our military. So, when some of the country’s most senior former officers – Field Marshall Lord Bramall, General Lord Ramsbotham, General Sir Hugh Beach, Major General Patrick Cordingley and Sir Richard Dannatt – express “deep concern” that Trident was excluded from the 2010 Strategic Defence Review, we should pay attention. In fact they went further saying there was: “…growing consensus that rapid cuts in nuclear forces…is the way to achieve international security.”

These men are not doves. They are hard-headed strategists who understand many of the military realities we face as a nation. They have provided an opportunity the Labour Party must not miss.

It is rare in politics that logic, morality, economic sense, political pragmatism and, in this case, military reality converge. And yet, clearly, on the issue of nuclear disarmament they have. Party policy must change on this matter if we are to have any hope of fulfilling our core desire for a better, fairer, safer world.