To remind us why CND is needed, Trump chose the weekend of the CND annual conference to announce his intention to tear up the 1987 The Intermediate-Range Nuclear Forces (INF) Treaty, which removed the threat of nuclear war in Europe by eliminating short- and medium- range ballistic and ground-launched cruise missiles.

Read what Labour CND Co-Chair Carol Turner has to say about it.

When President Trump signed the order to pull the US out, the Iran nuclear deal was dead in the water. CAROL TURNER, Vice Chair, Labour CND, asks why Trump withdrew from a landmark arms control agreement that everyone, including official US sources, said was working.

All parties agree that Iran was meeting its obligations under the Joint Comprehensive Plan of Action (JCPOA). The International Atomic Energy Agency (IAEA) inspectors have repeatedly confirmed this. Iran does not possess nuclear weapons.

END_OF_DOCUMENT_TOKEN_TO_BE_REPLACED 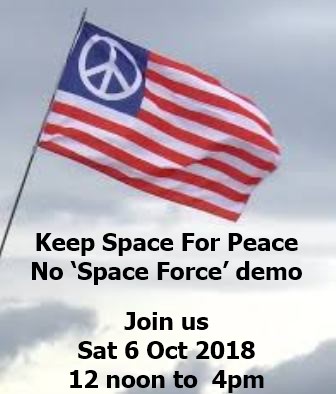 President Trump recently announced the formation of a US space force, saying: ‘it is not enough to merely have an American presence in space. We must have American dominance.’ Oxford CND and others have called a demonstration at USAF Croughton, a US communication base in Northamptonshire. Keep Space for Peace: No Space Force takes place 12 noon to 4pm on Saturday 6 October. Check out the details and join us there.

CND General Secretary Kate Hudson is urging support: ‘As if President Trump isn’t causing enough trouble already: trade wars with China, trashing the Iranian nuclear deal, on/off nuclear confrontation with North Korea, destabilising Venezuela, offending his erstwhile European allies… the list goes on and on. Now he’s instructed the Department of Defense and the Pentagon to set up a sixth branch of the armed forces: the Space Force.’

Read more on Dr Kate Hudson, CND General Secretary’s, blog.
The Iran nuclear agreement agreed some verifiable limits on Iranian nuclear development in return for lifting some economic sanctions. That’s exactly how deals between parties who don’t trust each other are negotiated. Hasn’t Trump’s withdrawal just proved Iran right to be suspicious of the US?
– Carol Turner, Vice Chair

The crisis on the Korean Peninsula is bringing the region closer to open military conflict than it’s been for many years, with unimaginable humanitarian consequences. By accident or design, the actions by North Korea and the United States could result in a nuclear detonation.

The war of words between Donald Trump and Kim Jong-un, reflects escalating provocations on both sides.

On 7 July the UN adopted the first-ever, legally-binding Treaty on the Prohibition of Nuclear Weapons. The UK boycotted the UN’s global nuclear ban negotiations. Britain greeted the treaty’s adoption with a statement signed jointly with the US and France, declaring: ‘We do not intend to sign, ratify or ever become party to it.’

A month later, President Trump was threatening ‘fire and fury like the world has never seen’.

END_OF_DOCUMENT_TOKEN_TO_BE_REPLACED

Did you know that despite heightened nuclear tensions on the Korean Peninsula Britain will be participating in US-led military exercises there for 10 days beginning Monday 21 August? These war games are a simulation of war with North Korea which involves around 85,000 land, sea and air personnel.

The government is keeping shtum about UK involvement – how many British forces and from which services will be taking part. But in the House of Lords in January, however, Defence Minister Earl Howe confirmed that the UK does take part in these exercises.

Jeremy Corbyn has urged the government to refrain from military intervention in North Korea, including the forthcoming Ulchi-Freedom Guardian exercises.