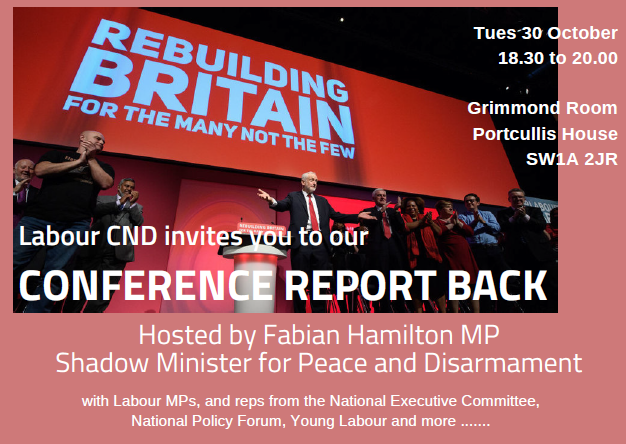 ‘The world order has been turned into a global free-for-all,’ Emily Thornberry, Shadow Foreign Secretary said in her speech to conference. Under Jeremy Corbyn’s leadership, however:

‘we will never as a party go back to supporting illegal, aggressive wars of intervention with no plans for the aftermath, and no thought for the consequences, whether in terms of the innocent lives lost or the ungoverned spaces created within which terrorist groups can thrive’

‘we must and will lead the world in promoting human rights, in reforming the arms trade, in pursuing an end to conflict, in supporting not demonising refugees, and in turning the promise of a nuclear-free world from an impossible dream to a concrete goal’

‘turning the promise of a nuclear-free world from an impossible dream to a concrete goal’.

Listen to Corbyn’s conference speech, or read the transcript here.

Labour CND was out in force at Labour conference, visible throughout at CND, Momentum and other fringe meetings, distributing our newsletter and contact card, and helping staff the CND stall where we signed up dozens of new subscribers to our e-news updates. Our daily meet-up sessions proved popular too, chatting to delegates and visitors over coffee. 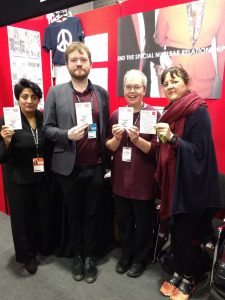 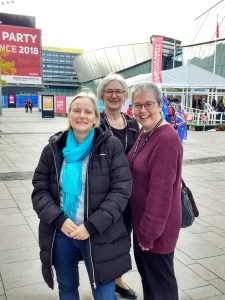 Contemporary motions are one of the few opportunities members have to influence conference agenda and the party’s policy making. We encourage you to submit a motion on behalf on Labour CND to help push nuclear disarmament higher on the agenda!

We have two suggestions this year: support for a Shadow Defence Diversification Agency – an urgent next step on the road to winning trade union support for scrapping Trident; and Reducing the risks of nuclear confrontation which calls for a Labour government to sign up to the UN Treaty on the Prohibition of Nuclear Weapons. 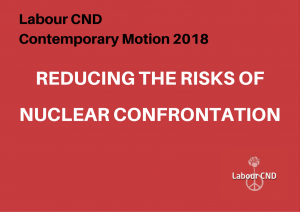 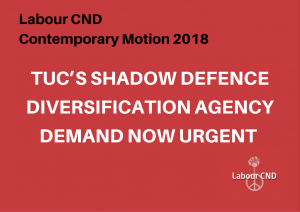 Every CLP has the right to submit one contemporary motion of no more than 250 words, provided it hasn’t already submitted a rule change resolution in 2018. Motions must be sent to Labour HQ in time for the DEADLINE of noon on 13 September.

They must refer to an event that takes place after the publication of the National Policy Forum report in early August – any motion without a contemporary reference will be ruled out of order.

If you submit a Labour CND motion, please let us know by emailing labourcnd@gmail.com.

Labour Party Women’s Conference 2018 will take place on Saturday 22 September, the day before Annual Conference opens. This year CLPs and affiliates can submit a resolution for debate by the deadline of FRIDAY 29 JUNE. We encourage all CLPs to submit motions supporting the UN treaty for a global ban on nuclear weapons. Here’s an example from Finchley and Golders Green: 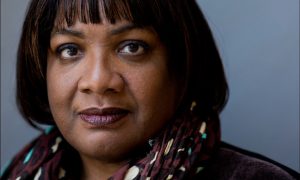 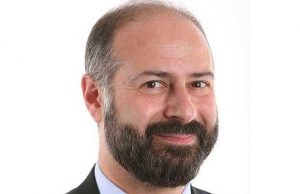 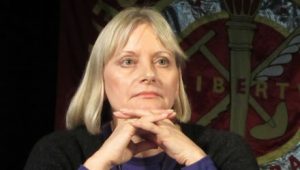 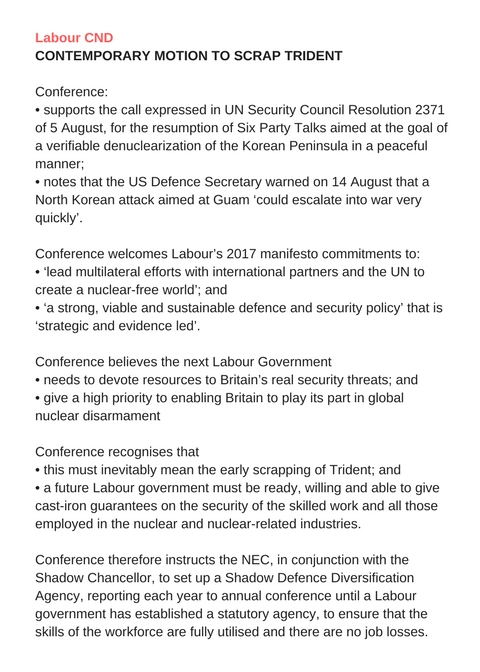 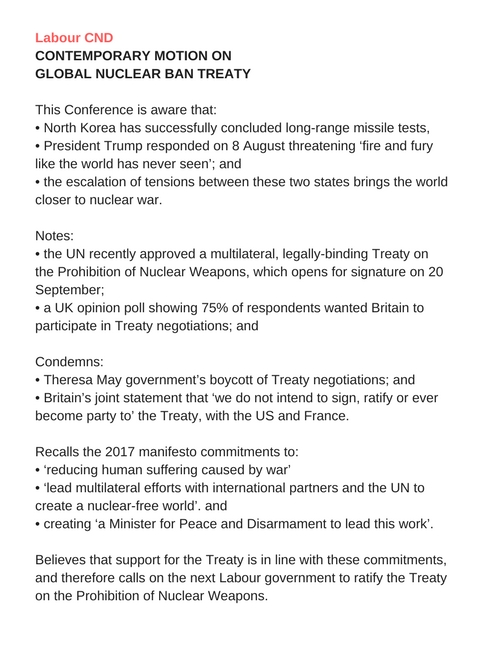 Labour CND has prepared an anti-Trident motion for Labour Party conference delegates to vote on in September. Labour’s annual conference has avoided a vote on Trident for almost 20 years – previous motions have been ruled out. But with huge opposition to Trident amongst Labour Party members and the present leadership clearly opposed to Trident, Conference 2016 represents a strong opportunity.
A change in Labour Party policy on Trident would be a huge step towards stopping government plans to replace Britain’s nuclear weapons system. It would mean a future Labour government could stop the programme before hundreds of billions are wasted on a militarily useless weapon. It would also be a strong platform to construct a new foreign policy designed for the 21st century.

Although CLPs have not been holding meetings in recent months, meetings to consider matters relating to Conference will be taking place in the coming weeks. The text of the motion is below, if you have any questions please email info@labourcnd.org.uk

Conference notes on the 19 August 2016 the United Nations Open-Ended Working Group on Nuclear Disarmament recommended that the General Assembly convene, in 2017, a conference to negotiate a legally-binding instrument to prohibit nuclear weapons, leading towards their total elimination. Conference condemns the United Kingdom boycott of the Open-Ended Working Group and calls on the Government to enter into negotiations in good faith to eliminate nuclear weapons around the world.

Conferences reaffirms its commitment to a world without nuclear weapons.

Conference recognises the strength of arguments against Trident from a financial point of view, and from the perspective of an assessment of the actual contemporary threats to British security, such as terrorism. Conference also accepts the compelling moral argument against the use of nuclear weapons.

Conference believes that defence diversification must be an urgent priority for the next Labour government. The next Labour Government must offer cast-iron guarantees on the security of related skilled employment, which is lacking from the existing ?Successor? programme. The priority must be to secure the employment for individuals and the future of the communities involved.

Conference therefore resolves:
1. That a Labour Government will cancel plans to replace Trident and engage in ongoing UN work towards a global nuclear weapons ban.
2. To instruct the NEC to immediately establish a ‘Shadow Defence Diversification Agency’ with trade union participation and which shall report annually to the Labour Party Conference until a Labour Government has set up a statutory Agency. 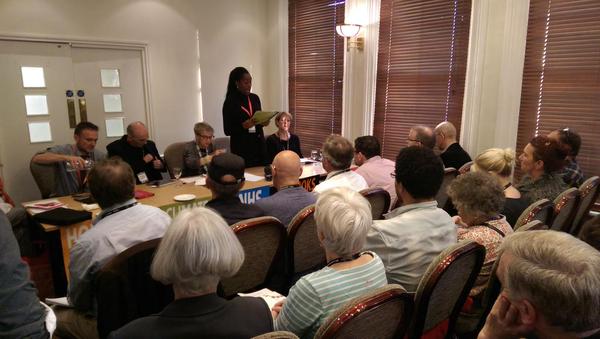 The CND, Labour CND and Labour Action for Peace fringe meeting is a firm fixture at the Labour Party Conference. This year, following delegates deciding not to put Trident on the conference agenda, the meeting was given an extra sense of urgency.

The meeting, which took place at the Mercure Hotel in Brighton was full long before the first speaker addressed the crowd. Delegates and party members were joined by members of the press to hear Kate Osamor MP, Julie Ward MEP, Chris Williamson (MP for Derby North 2010-2015) and Jo Rust and Simeon Elliott (both National Policy Forum). The meeting was Chaired by Kate Hudson, General Secretary of CND. There were also a host of jounralists in attendance, including several political editors and film crews from the UK and Germany. Kate Hudson started the meeting by reading out a statement from Jeremy Corbyn, who was due to speak at the meeting but was unable to attend due to his commitments as leader. The statement reaffirmed Jeremy’s position on Trident and he pledged to do his “persuasive best” to change Labour policy, for which he has a massive mandate.

Kate Osamor, recently elected in Edmonton, told the meeting that opposition to Trident had been a key part of Jeremy Corbyn’s platform in the Labour leadership election, and she was commited to doing everything she could to oppose spending £100 billion on a new generation of nuclear weapons.

Julie Ward MEP, representing the North West of England, spoke about the work she is involved in at the European level, but also locally. Her constituency includes both Barrow, where work on the replacement submarines will take place, and Manchester, one of the UKs many nuclear-free local authorities.

Jo Rust and Simeon Elliott, both recently elected to the National Policy Forum, both spoke about the need to engage members in the policy making.

After the opening remarks from the panel there were a range of questions from the floor including on the morality of nuclear weapons, the so-called deterrent effect and ideas for what else the money would be better spent on.