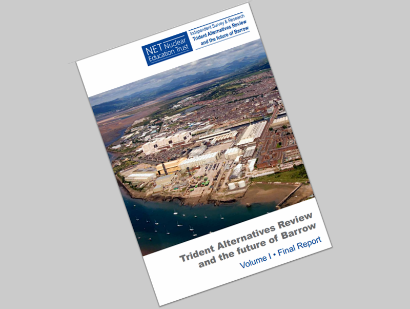 Labour CND has argued in the past that the decision on Trident replacement should be based on the needs of national security rather than economic issues. We do recognise the real concerns of increasing unemployment for a specialist workforce however.

This year we argued, ‘Trident uses skills that could be put to better use in other industries’ and that a Labour Government should ‘introduce an industrial plan for Barrow and other Trident-related facilities to maintain employment and the use of the skills base.’ Representing CND at the launch, Labour CND committee member Daniel Blaney made this very point.

But it was former Labour Defence Secretary Lord Des Browne chairing the meeting who made some of the most interesting points.

Browne summed up the discussion by looking ahead to 2015 and said he was an unlikely an incoming Labour Prime Minister inheriting a stagnant economy and having to deal with a Tory cuts agenda would plough ahead with Trident replacement, but would instead subject it to a strategic review.

Below you can read Daniel Blaney’s contribution.

Launch of Trident Alternatives Review and the Future of Barrow

Today’s report contains much detail on the situation in Barrow. It explores at length realistic but challenging work required for Barrow’s economy, but an over-arching theme is the phrase used: “it appears it is not all or nothing” for Barrow. On occasion it has been asserted by people who defend Trident Replacement, that it would be ‘all or nothing’ for Barrow and therefore the ‘nothing’ cannot be contemplated. CND agrees with the conclusion of the report that ‘there is a need for a wider and better informed debate’. This report is required reading for anyone interested in how government policy on nuclear weapons could develop and its implications for Barrow.

CND campaigns for full nuclear disarmament but it is clear that whatever the policy outcomes on the future of Trident and the potential nuclear or non-nuclear alternatives, Barrow needs a specific programme of alternative investment. The inquiry reports on high levels of unemployment in Barrow today, and notes that even if we were to proceed at Main Gate with full Trident Replacement in 2016, after an initial increase in employment, there would a moderate decline in that employment in the early 2020s – only some ten years away. This is consistent with historic swings in levels of employment in this sector as outlined. Barrow needs an alternative Industrial Strategy.

In our submission to the Inquiry, we wrote that CND believes there needs to be a government-supported plan for defence diversification. It is essential for Barrow, and the very high level scientific, design and technical skills held within the workforce at Barrow, are precisely those required for at least some of the technologies required for a transition to a green economy. We are pleased the report discusses this in some detail.

Diversification needs to be government led. A government-led defence diversification plan with real resources, early planning and trade union and community involvement could ensure that few if any jobs were lost in the event of nuclear submarine construction at Barrow coming to an end in the course of the next decade. Spending a fraction of the £20 billion procurement costs for Trident would enable local employers and local authorities to absorb many of those made redundant.

In relation to lessons from elsewhere, we noted in our submission to the Inquiry that in the United States, the Base Realignment and Closure initiative (BRAC) has been applied to 530 base closures and realignments since 1998. Almost all have achieved most of their objectives and a number have generated more employment than that lost through closure. BRAC is governed by legislation detailing key processes which ensure that redevelopment plans must come from the local community. A Local Redevelopment Authority is formed which must include all major groups and communities affected. Central government has a clear role in facilitating this process. It can ensure fast-track environmental clean-up, funds to provide transitional support for displaced workers and economic planning grants. It can ensure that property changes hands below market value if it is for job creating purposes.

If a programme such as this were implemented in Barrow, alternative employment could be provided and very few job losses need occur.

CND agrees with Recommendation One of the Report that “The Government should make a clear and binding statement of its responsibility to Barrow (as well as other towns exceptionally dependent on military contracts) in the event that military procurement decisions are changed”, but we also endorse the comment that “irrespective of the Main Gate decision in 2016, the government could and should take a number of steps now to support a fragile economy.”

CND will continue to campaign for full nuclear disarmament and we will promote the need for government-led diversification. It is in that context, we strongly welcome today’s report. We hope it will be considered by others and lead to sustained investment in Barrow, as the government and parliament decide what our national defence policy is to be in the years ahead.