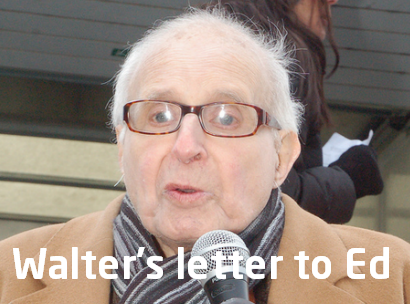 Many thanks for your good wishes for my 90th birthday and all you are doing to convince the people of this country that Labour can provide a socially just alternative to coalition austerity.

Many people realise that the coalition has failed but are not yet convinced that Labour has made up its own mind and that its policies are clear and credible.

One of the problems the country faces is that a replacement of the Trident weapon system is unaffordable, useless and – by encouraging proliferation – an obstacle to multilateral nuclear disarmament.

You should make sure that there is a vote at the 2013 Labour Party conference which I believe will decide to scrap Trident and not replace it.

With scrapping Trident increasingly popular amongst both Labour Party members and the public, particularly in the current economic crisis, such a principled stand will help to bring new members into the party it will also ensure that others will speak up for the Labour Party.

This is vitally necessary to build the kind of support that will secure a Labour Government. We need a Labour General Election victory.

As this is a matter of public interest I am publishing this letter of thanks on Labour CND’s website.