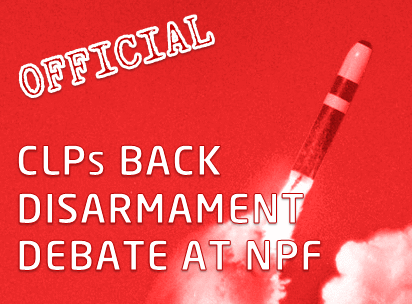 It’s official. With CLP submissions to Labour’s National Policy Forum consultation now in, Trident has emerged as a key issue.

It dominates the submissions to Britain’s Global Role paper.

Almost a third of all amendments submitted to the Britain’s Global Role paper, which covers all aspects of international policy, were on Trident.

Almost 50 CLPs (listed below) have submitted an amendment on Trident and 90% of them want to see it scrapped.

These numbers demonstrate that nuclear weapons – and a £100bn post-election decision on it being replaced – is a priority issue for Labour members.

Approximately 90% amendments simply want to see the system scrapped, while the rest urge Trident to be reconsidered in a post-election defence review and seek further commitments on disarmament.

Submissions came from around the country. The largest number came from London (10), South East (7) and Yorkshire (6) while East of England, Scotland, South West and Wales all saw 5 amendments submitted.

With submissions overwhelmingly in favour of decommissioning Trident and carrying out the UK’s historic nuclear disarmament commitment, it is time Labour delivered.

It is vital that CLP representatives on the NPF submit this issue and represent members by voting for decommissioning Trident and delivering disarmament.