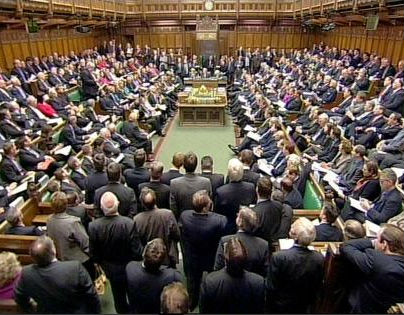 A muffled debate on the nuclear deterrent took place on 18 June which – for those who noticed – was deeply depressing. The news that the government is going to order the first reactor for a new generation of nuclear-armed submarines provoked mild anguish among some LibDems – and much more from the SNP which is opposed to Trident altogether, so that Defence Secretary Philip Hammond was obliged to make a statement to the House. But from Labour there was first silence, and then support.

Here, for those who support both Labour and CND to ponder deeply, are some key parts of the statement/question put to Hammond by Alison Seabeck (Plymouth Moor View), Labour shadow defence minister. I have added my own comments in square brackets.

“In a security landscape of few guarantees, our independent nuclear deterrent provides us with the ultimate insurance policy, strengthens our national security and increases our ability to achieve long-term global security aims….”  [This is indistinguishable from the Conservative view that Britain, unlike most other nations, must rely on nuclear weapons].

“…the development of the new reactor needs to go ahead whether or not there is a final decision on Trident, because it relates to the UK’s defence capability and to our submarine programme….” [This seems to mean that Labour believes Britain must retain nuclear submarines come what may].

“The country would therefore be deeply disappointed if defence of the Government ever took precedence over defence of the national interest.” [This appears to be a warning to the Tories not to make any concession – in order to keep the coalition government together – to LibDem unhappiness over Trident renewal].

Only a few MPs willing to speak up independently on defence raised the simple question: why continue with the  nuclear deterrent. “Do we not need to think again?”, asked Jeremy Corbyn (Labour, Islington North) , describing Trident as “a weapon of mass destruction of dubious legality and total morality”. Paul Flynn (Labour, Newport West) called it “little more than an impractical vanity and virility symbol”. David Lammy (Labour, Tottenham) asked which would make his constituents safer – “cutting Trident to fund extra police officers or cutting police officers to funds Trident?”

In theory the decision to go ahead with the replacement of the submarines which carry Trident (which is what the short-hand term “Trident renewal” really means) is still subject to a parliamentary decision in 2016. And again in theory, the LibDem sponsored Trident Alternative Review could come up with a different solution to maintain a British “nuclear deterrent in some different form. Hammond barely acknowledged even that possibility, saying instead that

“The investment in Trident and the successor class submarine is a long-term programme to provide for Britain’s strategic security over the next 40 to 50 years. I believe that it is one of the most important functions of government to protect the population against the strategic threats in the world, which, if anything, are growing, not diminishing.”

This expresses the core belief in the Conservative defence establishment, and in the MoD, that for all the talk of disarmament, nuclear weapons should be kept indefinitely because one cannot predict what may happen in the future. Tony Blair and Gordon Brown when in office subscribed to exactly the same doctrine: how can we persuade their successors to have the political courage to revise it?

John is a member of Witney CLP, and author of The Glorious Art of Peace: From the Iliad to Iraq (OUP)