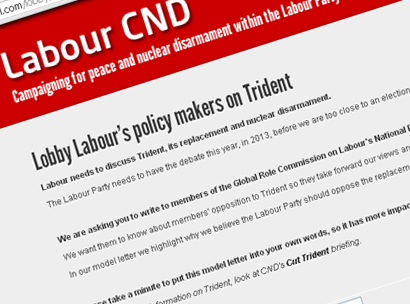 George McManus is a member of the National Policy Forum from Yorkshire and the Humber region, and sits on it’s Global Role Commission.

Here he explains why you need to tell your NPF reps your own views on Trident replacement which will discuss Trident before Annual Conference.

“In recent weeks, senior Labour figures have been getting stuck into the Trident debate and the question of whether the UK should develop a new nuclear weapon system.

Des Browne, Labour’s former Defence Secretary, recently wrote in the Daily Telegraph, ‘Since 2006, important things have changed and it is time for a more honest debate about the defence choices facing the country’.

John Hutton and George Robertson hit back, writing ‘there is no magic alternative to Trident’

More recently, John Prescott, in the Sunday Mirror this week, said, ‘for David Cameron to claim that the North Korea situation proves why we must spend £20billion on a new Trident nuclear defence system is just absurd … let’s not be conned into replacing Trident, which as well as the £20 bilion price tag will cost £3 billion per year for the next 30 years to maintain.’

And former chief whip Nick Brown, wrote, ‘The answer to international uncertainty is not to buy the most powerful weapon system available and threaten all comers.’

So MPs and Peers are having their say – and they’re not all saying what you might expect. But what are the views of the party membership? How can ordinary members contribute to the debate?

Last year a meeting of the NPF’s Britain in the World Commission lots of NPF members expressed opposition to Trident replacement. But how many of you knew?

The official report said there were a variety of views and agreed that the same Commission should discuss Trident again this year.

This discussion may be hinged on the terms of the Lib Dem Trident Alternatives Review, but I think it’s important the party has a much more important debate, about whether we have nuclear weapons at all.

Being frank, my position right now is that we shouldn’t replace Trident – the UK shouldn’t have nuclear weapons.

The UK signed a deal in 1970 that we would get rid of our nuclear weapons. Both we and the Tories say we’re committed to that deal but no-one believes the Tories will carry it out.

I think we should do the right thing and stick to our promises on nuclear disarmament.

As a member of the Global Role Policy Commission, I am delighted that CLPs have been writing to me saying that there is no moral, economic or strategic case for Trident renewal.

But more importantly, I’m glad that we may now be in a position to have a mature debate about the issues. But this will only happen if you, the members, demand that such a discussion takes place.

The YourBritain website is a major step forward in facilitating this discussion and I would urge you to engage with it.

That’s why I’m delighted that Labour CND are encouraging you to write in to members of the NPF’s Global Role Commission and tell us your views on Trident.”