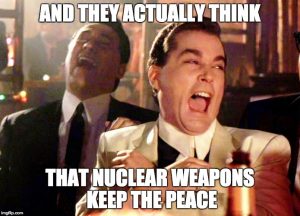 The attacks on Jeremy Corbyn support for nuclear disarmament began on day one of the election campaign.

In the BBC’s Andrew Marr Show (23/04/2017) interview at the start of the general election campaign, Corbyn said that an incoming Labour government would carry out a defence review, including the Trident nuclear weapons system. A couple of days later, the Guardian carried an article claiming this statement meant he was in breach of Labour’s manifesto commitments.

Labour CND chair, Walter Wolfgang replied to this accusation in a letter the Guardian failed to publish:

Your article in the Guardian on Monday “Corbyn is behaving a bit like the right wingers he once denounced” is mistaken. The 2014 Labour Party conference decided that the national policy forum would seek the opinion of party members on a new statement on Trident replacement.

Statements were collected from Labour Party members and most of these were opposed to Trident replacement. The incidence of a second Labour Party leadership election meant that the review was never published.

Consequently the issue is still open and Jeremy Corbyn was correct to suggest that the best way of resolving it would be by a Labour government having a Strategic Defence and Security Review. This should be clearly stated in Labour’s 2017 manifesto.

As usual nowadays, the Guardian was acting as the purveyor of the Progress view point – cherry picking those parts of Labour policy which represent the pro-Trident standpoint.

As Walter makes clear, the defence review is Labour policy too, and the party should return to this when the election is over. We already know that a majority of members are opposed to Trident replacement, as are sections of the military and a wide variety of security think tanks and individuals.

Jeremy’s statements on the Andrew Marr Show and elsewhere are entirely in line with this.

The rogue point of view is that which ignores these aspects of policy and attempts to suggest that Trident replacement must override all other aspects of Labour’s security and defence policy.

No one’s been prepared to put that to a vote at the National Policy Forum or Labour’s annual conference. And we suspect we know why!