‘Employment in the UK arms industry has been in decline for several decades and is likely to continue,’ said Barnaby Pace, at the parliamentary launch of a Nuclear Education Trust report he authored, Defence Diversification: International learning for Trident jobs. 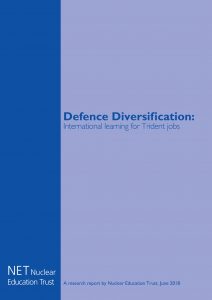 This decline is ‘due to the increasingly capital intensive nature of the work carried out in the UK, as well as automation, globalised supply chains, limited increases in defence spending and a highly competitive arms export market.’

Despite the 2016 vote to replace Trident, ‘uncertainties remain over the future of the programme’, Pace asserted – its affordability, technical feasibility, and the possibility that it will be scaled back or wound down in the event of a change of government.