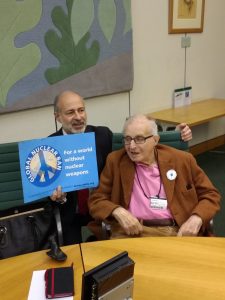 Fabian Hamilton, Shadow Minister for Peace & Disarmament, hosted Labour CND’s report back in parliament in October, and took the opportunity to outline his vision of a Peace Doctrine for Labour.

He made clear his support for signing the UN nuclear ban treaty, so the UK ‘will become a voice for eradicating nuclear weapons’. Walter Wolfgang described the 2018 conference was the most positive since the 1970s. But Lloyd Russell-Moyle MP urged us to carry on pushing for the positive change we want to see.