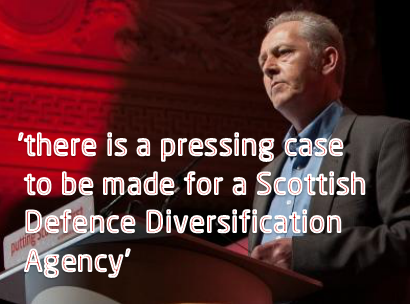 Jackson Cullinane explains why defence diversification needs to be back on the agenda of trade unionists.

There are several reasons why STUC Congresses and policy conferences of the major STUC affiliates have in recent years consistently reaffirmed their opposition to nuclear weapons and to Trident replacement in particular.

The possession of nuclear weapons, threatening death and destruction to millions, is widely accepted as immoral and the assertion that possessing such weapons constitutes a deterrence is, to say the least, highly questionable.

The description of Britain’s nuclear weapons as being “independent” can also be called into question given that Trident is leased from the US, guided by US satellites and overhauled at Kings Bay in Georgia.

Most analysts consider it inconceivable that the system would be deployed outside the realms of US foreign policy aspirations or without authorisation from Washington.

And then we have the fact that the development and possession of ever-larger and increasingly accurate nuclear weapons systems directly contradicts the aims and objectives of international treaties on proliferation.

There are clearly difficulties in dissuading countries such as North Korea or Iran from developing nuclear weapons if British defence policy appears to promote the “value” of such weapons and a belief that they can ensure influence in the international arena.

Perhaps the most powerful argument for trade union opposition to nuclear weapons is on the grounds of cost, particularly at a time of austerity and service cuts.

When trade unionists face job losses, wage freezes, wage reductions, privatisations, cuts to terms and conditions and are being continually told to “tighten your belts,” proposals to spend up to £100 billion on a weapon of mass destruction, which will hopefully never be used, makes no economic sense.

The opposition of the bulk of the trade union movement to nuclear weapons appears unequivocal and assured. Or is it?

Despite the “paper policy” of trade unions opposing nuclear weapons, it should be noted that approval of these policies has seldom been unanimous when they have been debated at trade union conferences.

It should also be noted that there has been a marked reduction in the number of trade unionists and visible trade union banners on anti-nuclear weapons protests in recent years.

This is in contrast to the large mobilisation of trade unions that we saw in the big demonstrations against Polaris, Cruise and Pershing when the activities of CND were at their peak during the 1960s and ’80s.

Just as the “jobs and services” argument has been pivotal in securing the reaffirmation of trade union opposition to Trident in terms of paper policy, concerns over possible job losses may also explain the seeming reluctance of trade unions to prioritise involvement in the anti-nuclear weapons movement.

It is important to remember that advocates of maintaining Britain’s nuclear arsenal consistently emphasise the likelihood of job losses if this arsenal is to be abandoned.

While many studies, such as that conducted jointly by the STUC and Scottish CND in 2007, have played a crucial role in exposing the exaggerated claims of job loss among defence workers, concerns remain.

In contemplating a situation in which Trident were to be removed from the Clyde, the oft-cited suggestion that Trident expenditure should simply and wholly be transferred to public services might well appeal to public-sector workers. However, this scenario offers small comfort to defence workers if they were expected to shoulder the loss, however temporary, of skilled and relatively well-paid employment.

Similarly, references by some in the peace movement to the loss of “only” 1,700 Trident-related jobs at Faslane is unlikely to inspire those workers directly affected to enthusiastically promote an anti-nuclear weapons position, even if this is the official policy of their own union.

Given these understandable concerns, what needs to be done in order to secure the continued support of trade unions for anti-nuclear weapons policies?

Perhaps most importantly, given that protest against nuclear weapons may need to be maintained for some time if it is to be effective, how can longer-term engagement with and involvement by trade unionists in protest campaigns be secured?

A starting point is to take seriously defence workers’ concerns over their job security and to recognise that Scottish defence jobs have been haemorrhaging over many years.

Significantly, these jobs have been reducing over the lifetime of the existing Trident programme.

Over that period, 40,000 (35 per cent) of defence jobs have been lost, including 100 at Coulport, when overhaul responsibilities shifted to the US, and 250 at Faslane, principally as a consequence of Babcock privatisation.

The clear message is that Trident and expenditure on nuclear weapons is costing, and will continue to cost, jobs in the defence sector.

Following on from this, it is important to recognise that the job concerns of defence workers extend beyond those who are currently engaged in work related to nuclear weapons.

In recent weeks and months, shipbuilding workers – notably those at BAE Systems – have been seeking assurances over future orders.

In its recently published independence white paper, the Scottish government has pledged – if re-elected in the aftermath of a Yes vote in September’s independence referendum – to ensure the construction of four frigates on the Clyde.

Some trade union representatives, however, suggest that this promise is a hollow one – they claim that two of these frigates are likely to be completed under existing contracts in any case and that contracts for a minimum of 13 frigates are required in order to secure the medium to long-term future of the Clyde yards.

Concerns have been raised over the prospect of the Clyde shipyards losing out on British defence contracts in the event that Scotland votes for independence – this issue will, of course, continue to feature in the referendum debate.

While this suggestion is refuted by the Scottish government and others, what certainly should be accepted is that defence workers’ concerns over their future job security are real and understandable.

Whatever the outcome of the independence referendum, action is required to diversify work and to secure the employment of workers currently engaged in defence-related work, whether conventional or nuclear.

For this to occur, there is a pressing case to be made for the creation of a Scottish defence diversification agency. Such an agency would need to be properly staffed and resourced and would need to engage meaningfully with trade union representatives in order to develop and implement plans that are co-ordinated, realistic and have the confidence of the workforce.

Too often in the past such plans have failed through a lack of commitment to invest or due to a limitation in ideas. There are currently trade unionists who, having been previously engaged in discussions on diversification organised at the STUC, are now disillusioned with this project due to the minimal job potential of the suggestions which were made in those previous conversations.

As a precursor to developing concrete proposals on defence diversification, there is perhaps a case for a second STUC/CND report on the employment effects of Trident removal, one that includes a definitive skills audit and begins to make firm suggestions for a transition to alternative, but equivalent – in terms of skills base and earning potential – forms of employment.

Such a report should also complement others, such as those being commissioned by Unite via the Jimmy Reid Foundation, into the future of defence, shipbuilding and aerospace in Scotland.

Raising these issues and truly taking on board the concerns of defence workers is very much in the interest of the peace and anti-nuclear weapons movement.

Doing so could ensure the continuation of supportive union policies and the active involvement of trade unions in future moves for peace and nuclear disarmament.

Jackson Cullinane is a political officer at Unite Scotland.

This article is written in a personal capacity and was first published by the Morning Star.